A+ A-
Print Email
Yakubu Dogara, speaker of the house of representatives, says former Vice-President Atiku Abubakar “solidly” backed Bukola Saraki’s bid to be senate president in 2015 — despite strong opposition from the leadership of the All Progressives Congress (APC), apparently including President Muhammadu Buhari. 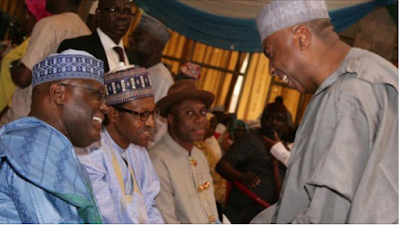 Dogara himself was not supported to be speaker by the party hierarchy, but he braved all opposition — including that from Bola Tinubu, a respected leader of APC — and went on to defeat the favoured Femi Gbajabiamila in a tight contest.

Ahmed Lawan was the choice of the APC leadership for senate president.

Atiku, Dogara and Atiku all moved from the Peoples Democratic Party (PDP) in 2014 after the then-ruling party was internally fractured .

In his biography, ‘A Reed Made Flint’, authored by Ovation publisher, Dele Momodu, Dogara provided more insight into the politics that ushered in the President Muhammadu Buhari administration in May 2015.

The biography is due for public presentation on December 26, 2017 to mark the 50th birthday of the speaker.

Dogara told the author: “There was this particular time we were meeting with our leader in the North-East, His Excellency Atiku Abubakar at his residence. Our governor (Mohammed Abubakar) had come into town and some of our stakeholders in APC Bauchi had gone to see Alhaji Atiku Abubakar. Somehow, Asiwaju (Bola Tinubu) and one other person walked into that meeting and he did not waste time in pushing his Gbajabiamila agenda forward.

“He spoke passionately about the role he had played in APC, the way he had built bridges between the South-West and the North and he appealed to my brothers and sisters who were there, all the political leaders and stake holders of APC from my state to prevail on me to stop this race and support his candidate Femi Gbajabiamila to become Speaker. After he had spoken, he left.

“If I don’t say this to Alhaji Atiku Abubakar’s credit I will not be fair to him. It will amount to travesty. At the time when most leaders in the APC were not showing sympathy to our cause, Alhaji Atiku Abubakar came out as one solid voice in support of both the candidature of the now Senate President (Bukola Saraki) and my humble self.

“He said the North-East must have a position and it was his duty as a leader from the North-East to support that goal. And more so, because of the religious demography of Nigeria there was the need to have a Northern minority Christian in government as that would help to smoothen religious engagement and relationship in the North and put paid to the insinuation that APC was just a Muslim party.”

While Dogara started his speakership on a relatively smooth note, Saraki was charged before the code of conduct tribunal over allegations of false declaration of assets while he was governor of Kwara state from 2003-2007.

Atiku recently returned to the PDP, where he is expected to contest for the presidential ticket ahead of a potential battle with Buhari in 2019.