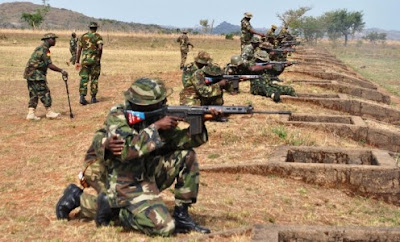 The Brigade Commander, 35 Artillery Brigade, Nigeria Army, Alamara, Abeokuta, Basil Adoke, has advised residents of Ogun State and visitors not to panic with the imminent coming of a military campaign tagged ‘Operation Crocodile Smiles’ in the state.


Basil said the exercise, when it eventually arrives and commence, would be targeted only at “miscreants and other criminals,” adding that the law abiding members of the society have nothing whatsoever to fear about it.

The Brigade Commander who made this known at the Government House, Abeokuta, the Ogun State capital, in his remarks during the cutting of the 57 Independence Day anniversary cake, said though the state is “relatively peaceful,” there was also the need to sustain the peace.

“Operation Crocodile smiles will take care of miscreants and nobody should panic or entertain fear about it except miscreants. There is relative peace in Ogun State but the peace should also be sustained,” Adoke said.

Earlier, Governor Ibikunle Amosun in his remarks, expressed the confidence that his successor would do better than him as the bar of governance has been raised in the state since May 29, 2011.

Amosun recalled that the tell tale sign among others, that a successor would out-perform him, include the World bank’s $350m credit facility being extended to the state government to access at one percent interest rate.

He noted that Lagos state government during the era of Babatunde Fashola, SAN, availed itself of such soft loan facility and that the incumbent administration in Lagos has also accessed part of that initiative started by Fashola to embark upon the on – going projects in the state.

According to the Governor, should the Ogun State government accessed the $350m credit facility, even succeeding administration would access part of the fund.