A+ A-
Print Email
Governor Okezie Ikpeazu of Abia State, has revealed how he prevented war, following the agitation by Nnamdi Kanu, leader of the Indigenous People of Biafra, IPOB. 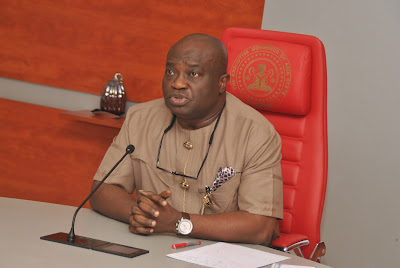 The governor noted that Kanu’s refusal to adhere to advice by South East governors and Ohanaeze leadership led to the Military action and as the “Chief Security Officer” of his state he had to back the action so as to safeguard lives and properties.

Ikpeazu said both Ohanaeze leadership and South East governors wanted Kanu to make intellectual arguments to the Federal government on the issues affecting the region but he refused, opting for his style of agitation.

Speaking with The Sun, Ikpeazu said, “If you have a two year old child in this house today and that child doesn’t go to school, he doesn’t go anywhere, before you go out and come back, you will discover that somebody with a lot of energy is residing with you here. So the idea is that all these agitations bottled up and all that created what you call IPOB.

“And then, the federal government over time started watching from the sideline because IPOB was getting money from elsewhere, setting up radio stations, indoctrinating people, all that went on. But while that was going on, at a point, the leadership of the south east through Ohanaeze, through the governors started engaging Nnamdi to say, we know that there are issues.

“Can we find alternative channels to discuss them? Can we make studied and intellectual presentations and confront the federal government with these arguments? But he felt that his own strategy was better and all that.

“So, I think it got to a point when the federal government began to feel that the red line was threatened and unfortunately some of us as governors were not taken into confidence as to the details and plans and intentions of the federal government and it is the irony of this thing they call governors as chief security officers; a chief security officer but you are not controlling the Commissioner of Police, CP, the soldiers around you, the navy around you, you cannot tell them to stop, you cannot tell them where to go and all that.

” So that clash came up on us in Abia State and I was confronted as a leader to make a choice between the oath I swore, what was politically expedient and what was right and I think what -was right was for me to do everything to protect the lives and properties of Abians and those that are doing business in Abia.

“So all that I did, the press releases, my actions, all that I did was geared towards fulfilling my mandate which was to protect lives and properties of not only Abians but of everybody that was within Abia doing business. I did not wish for one soul to die, whether IPOB or a Fulani man or a Kogi man, I didn’t want anybody to lose his life or for us to begin to spill blood in my state.

“Like I told some people, my mother told me that everybody should do everything to make sure that war does not ensue in his mother’s kitchen because the pots will break, the plates will break and after the war, with what are you going to eat? So, I do not want a war in my kitchen. If there must be war, let the war go elsewhere not in my kitchen. And then I thank God and I give Him all the glory that he gave us the wisdom to take the steps we took.”