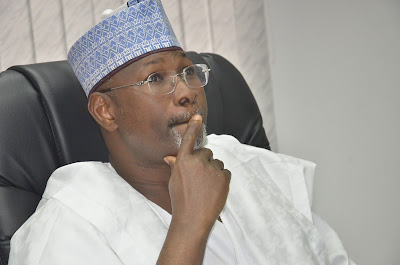 Former chairman of Independent National Electoral Commission, INEC, Prof. Attahiru Jega, has said the national electoral body would be better off, if the President was not directly involved in the appointment of its head. Jega, who spoke at a public lecture organised by Aminu Kano Centre for Democratic Research and Training, Mambayya House, Kano, said this could be achieved through a legislation in the National Assembly.


He specifically mentioned the need for an independent appointment of the INEC chairman when he fielded questions during the lecture, entitled ‘Electoral Democracy and Integrity in Nigeria: Reflections on INEC’s Transformation 2011-2015.’ The former INEC boss emphasised the imperatives of having an autonomous INEC in terms of funding and appointment of its chairman as well as its commissioners, and described it as a critical factor for achieving more credible elections in the future.

He expressed worries that the former Chief Justice of Nigeria, Muhammed Uwais-led electoral reform committee had recommended that INEC should be given autonomy to appoint its chairman and commissioners, but regretted that the executive did not accept the recommendation. Jega said: “Still the President nominates INEC’s chairman.

It is important to legislate the appointment of the INEC chairman. Despite the fact that Nigeria had achieved a lot, there was need for more reforms. “Ghana that we celebrate has the worst process of appointing chairman of its electoral body. Once the President nominates, the nominee will obviously emerge as chairman and will stay on that position until he reaches his retirement age, which is 70.’’ He, however, agreed that the present INEC enjoys relative autonomy in terms of funding as recommended by the Uwais-led committee. “INEC currently has account with the CBN where it controls all its money.

This has given the commission relative autonomy in terms of funding. Once money is released into its account, it can control it,” he said. Jega conducted the 2015 elections, which led to transition of power incumbent party in power, Peoples Democratic Party, PDP, to the opposition All Progressives Congress, APC.