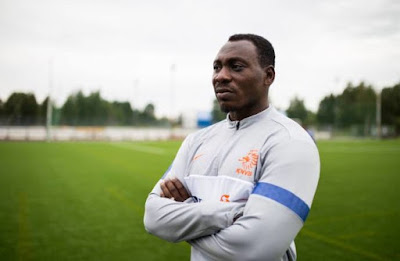 Former Super Eagles assistant coach, Daniel Amokachi, has been promoted to the position of Technical Director of Finnish League side, JS Hercules.


Amokachi was appointed coach of the team in January 2016, but will now work with the team in a bigger capacity.

“In a decision that will change and expand the role Mr. Amokachi has within the Club, Hercules Board of Directors has met with Daniel and we’ve made a joint decision that he will continue with the position of Technical Director of JS Hercules.

“His work as a member of the Hercules family continues in a new capacity, where he can be of tremendous assistance with his strong personal brand and connections.

“We’re always looking to take the Club forward and this decision has been made to better leverage our current international efforts,” an official statement from JS Hercules reads.

Speaking on the decision, Amokachi said: “This decision allows me to proceed with my media work and bring more global recognition to the club, where the coaching role limited me in some aspects from doing what I can do for the club to move forward.”

According to the club’s statement, Amokachi took the time to explain the decision to the first team together with the chairman.

“It was hard for me and for the players, but we all know that this is better for the team.

“I still go to the training sessions and I will continue to help them with one on one sessions to improve their football skills”, he said.