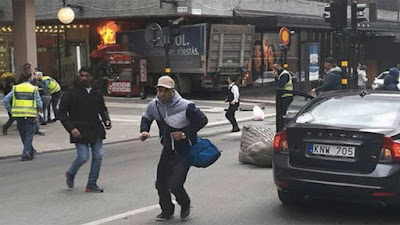 A van drove into a crowd of people outside a busy department store in central Stockholm on Friday, injuring people, police said.

“Police received a call from SOS Alarm that a person in a vehicle has injured other people on Drottninggatan,” police wrote on Twitter.

The incident occurred just before 1300 GMT at corner of the Ahlens department store and the city’s biggest pedestrian street, above-ground from Stockholm’s central subway station.

Thick smoke was rising from the scene, but police have yet to confirm the information.


Video images showed an area blocked off by police and crowds gathering around the police cordon.

Helicopters could be heard hovering in the sky over central Stockholm, and a large number of police cars and ambulances were dispatched to the scene, witnesses said.

Swedish police have confirmed that three people have been killed in the incident.

The Swedish news agency TT has said the Prime Minister said "Sweden has been attacked" and "everything is pointing to an act of terror".

The nation's security forces told CNN that many people have been injured and they are investigating whether there was one person in the truck or several.