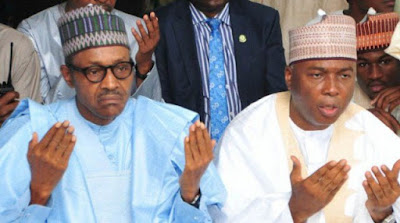 The President of the Senate, Bukola Saraki, was one of the top government officials who joined President Muhammadu Buhari for the Jumat prayer at the Presidential Villa, Abuja on Friday.


The Acting Chairman of the Economic and Financial Crimes Commission, Ibrahim Magu; and the Comptroller-General of Nigeria Customs Service, Col. Hameed Ali (retd.), who have been having running battles with the Senate also participated in the prayer.

The Katsina State Governor, Aminu Masari; and the Director-General of the Department of State Services, Lawal Daura, were also in attendance.

After the service, Saraki walked pass the Press Gallery to meet briefly with Vice-President Yemi Osinbajo in his office.

He was walking a few metres being Magu who also took the same route out of the premises.

The Senate under Saraki’s leadership had rejected the nomination of Magu as the substantive chairman of the EFCC two times based on security report authored by Daura-led DSS.

Ali had also dragged the Senate to court over the insistence of the Senators that he must appear before them in uniform.

None of the officials spoke with journalists at the end of the prayer.