PDP youths give Sheriff seven-day ultimatum to apologise to Jonathan 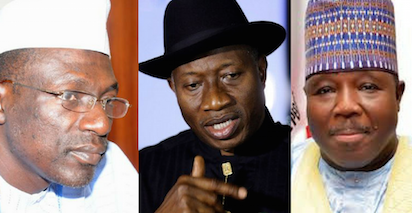 A group of youths in the Peoples Democratic Party (PDP) has demanded that the National Chairman of party Alhaji Ali Modu Sheriff must apologise to former President Goodluck Jonathan for walking out on him and other PDP leaders at the party’s stakeholders meeting in Abuja last week Thursday.

The youths, under the aegis of the Almagamated PDP Youth Leaders Nationwide, said that it was an embarrassment for Sheriff to have walked out on the former President who they described as leader of the party.

Addressing journalists in Abuja on Wednesday, the Chairman of the group, Segun Aderemi said that Sheriff disrespected the party by walking out on Jonathan and other party leaders during the stakeholders meeting.

The group gave the party chairman seven days within which to tender apology to Jonathan and other party leaders, for embarrassing them through his conduct last Thursday.

“We witnessed what happened that day, when he walked out on the former President. Would Sheriff be happy if any member of the party embarrassed him the way he embarrassed Jonathan that day?

“He has to tender an unreserved apology to the former President, the Board of Trustees (BoT) and other leaders of the party.

“We insist he should tender unreserved apology. We strongly believe that he is going to do the needful”, Aderemi stated.

He said the youths don’t against have any issues with Sheriff or the chairman of the Caretaker Committee, Senator Ahmed Makarfi, stressing that the goal was to ensure timely resolution of the leadership crisis in the party.

Aderemi explained that the Almagamated PDP Youth Leaders are made up of youths from Both the Sheriff and Makarfi camps.