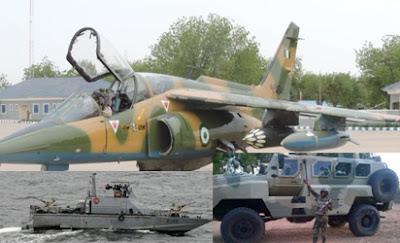 The Nigerian Air Force (NAF) on Wednesday said it has introduced an Unmanned Combat Aerial Vehicle (UCAV) and L-39ZA fighter aircraft into the ongoing fight against Boko Haram insurgents in the Northeast.


During a press conference in Yola to give an giving an appraisal of the operations of the NAF in the first quarter of 2017, the Air Component Commander (ACC), Operation Lafiya Dole, Air Commodore Charles Owho said the introduction of the new platforms was necessitated by the enlargement of the NAF Area of Responsibility (AOR).

The additional platforms deployed would join the now ageing Alpha jets, F9 jets, Mi 35 helicopters which have been in action since the beginning of the war on the insurgency. Already the UCAV CH-3A has already conducted Air Interdiction on March 27, 2017.

Air Commodore Ohwo also revealed that several Intelligence, Surveillance and Reconnaissance (ISR) operations by the NAF has revealed that following the fall and capture of the insurgents former headquarters in Camp Zairo, most of the fighters fled to the West of Sambisa stretching up to the Southwest of Maiduguri and into Yobe State, while some others had moved to the East and Southeast of Sambisa towards Gwoza Hills and Tagoshe Hills.

Owho said the Air Component of Operation Lafiya Dole has concentrated its air power the areaswith a view to further decimating the remaining BHT elements and facilitating the activities of own surface forces in the area.

Among the operations conducted by the Air Component was the provision of daily air support for clearance operation in the south-west of Maiduguri at Boko Haram camps in Talala and Ajigin.

At the same location, on February 1, 2017, Alpha jets provided Close Air Support for ground troops to repel an attack from Boko Haram. Also, operations conducted by the troops of 21 brigade of 7 Division also provided ISR for the clearance operations in Ngoshe and Mabila high grounds.

Also, the ISR platform also conducted various operations in Arege, northern Borno where a platoon of Boko Haram insurgents was sighted. “Our ISR aircraft maintained visual over BHTs in Arege and tracked them as shown on the screen. The BHTs took advantage of poor visibility and the terrain to escape imminent air strikes.

“However, the efficient communication of the ISR ac with MNJTF forces eventually led to the dislodgement of the terrorists in a firefight. In this encounter, about 57 terrorists were killed and many injured while technical, weapons and ammo were recovered,” Ohwo said.