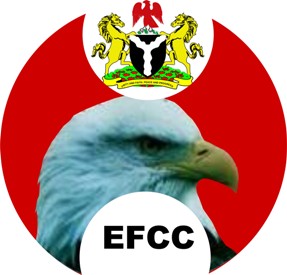 An activist lawyer, Mr. Olukoya Ogungbeje, has sued the Economic and Financial Crimes Commission urging the court to suspend action on the forfeiture application filed by the agency in respect of the cash sums of $43,449,947, £27,800 and N23,218,000 recovered from an apartment in the Ikoyi area of Lagos State.


Ogungbeje, who sued the EFCC at the Federal High Court in Lagos, urged the court not to order the forfeiture of the funds to the Federal Government until the question of the ownership of the funds had been resolved.

He noted that there were claims and counter-claims as to ownership of the money by the Rivers State Government and the National Intelligence Agency.

The lawyer said it would be in the interest of justice for the court to suspend action on the forfeiture proceedings pending the outcome of findings by panel headed by Vice-President Yemi Osinbajo.

The EFCC had on April 13 secured an interim order temporarily forfeiting the money, recovered from No.16, Osborne Road, Osborne Towers, Flat 7B, to the Federal Government.

Justice Muslim Hassan, who made the temporary forfeiture order, had adjourned till May 5, 2017 for anyone interested in the funds to show up before him to show cause why the money should not be permanently forfeited to the Federal Government

But Ogungbeje, in his motion on notice, is praying the court for an order, directing the EFCC to furnish the court with a report of its preliminary or final investigation on the source of the monies, the owner, and how the currencies got into the building.
The lawyer wants the court to compel the EFCC, the Independent Corrupt Practices and other related offences Commission and the police to immediately begin a thorough investigation of the recovered money.

“This honourable court has the inherent jurisdiction under Section 6 (6)(b) of the Constitution to order and direct thorough investigation of the sources of the monies, their owners, the owners of the Osborne Towers where the monies were found and how they got into the building.

He argued that the EFCC would not be prejudiced if his prayers were granted by the court.

The court has yet to fix a date to hear the suit.