I kept my promise to Americans – Donald Trump 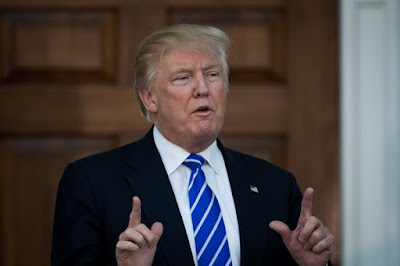 The president of the United State of America, Donald Trump on Saturday said that he has kept his campaign promises to the people of Americans. He made the remark while addressing citizens of American, exposing his achievements since he took over from his predecessor, Barack Obama.

In the past 100 days, I have kept that promise — and more. Issue by issue, department by department, we are giving the people their country back. After decades of a shrinking middle class, open borders and the mass offshoring of American jobs and wealth, this government is working for the citizens of our country and no one else. The same establishment media that concealed these problems — and profited from them — is obviously not going to tell this story.

That is why we are taking our message directly to America. We have opened the White House doors to listen, engage and act. We’ve invited in labor leaders, factory owners, police officers, farmers, veterans and Democrats, Republicans and independents. The change began with the termination of the Trans- Pacific Partnership— a 12-nation pact that would have shipped millions more jobs to other countries. But leaving the TPP was only the beginning. We have also launched an investigation into foreign trading abuses and taken steps to protect the production of American steel and aluminum.

After years of federal contracts going to foreign bidders, we are ensuring that government agencies enforce “Buy American” rules and give preference to American companies — and that American companies hire American workers. Crucially, to bring back our jobs, we are going to pursue a complete renegotiation of the North American Free Trade Agreement: We’ve lost nearly a third of our manufacturing jobs in the 23 years since that terrible deal was approved.

At the center of our economic agenda, we’ve undertaken the most far-reaching effort in history to remove job-killing regulations.I ‘ve ordered that for every one new regulation, two old regulations must be eliminated. We’ve signed a record 13 Congressional Review Act resolutions to scrap job-crushing regulations, and I’ve signed 29 pieces of legislation in total — a mark not surpassed in the first 100 days since Harry S. Truman. Those newly enacted laws include Veterans’ Choice legislation — which became law while at the same time we’ve increased by 42 percent the number of veterans approved to see the doctor of their choosing.

And we’ve provided transparency by publishing all wait times at the Veterans Affairs health system online, backed up by a new Veterans Affairs Office of Accountability. On energy, the change has been profound. We’ve canceled restrictions on the production of oil, natural gas and clean coal. What we’ve accomplished on immigration and criminal enforcement is nothing short of historic.

After decades of unending illegal immigration and mass uncontrolled entry, we’ve turned the tide as never before — illegal border-crossings are down 73 percent.

Visa processes are being reformed to substantially improve vetting and screening, and we’ve launched prototypes and bidding for the border wall to stop the scourge of drugs, human trafficking and illegal immigrants from coming into our country. Federal law enforcement has begun a crackdown on sanctuary cities that harbor criminal aliens — because we know the first duty of government is to protect American citizens.

The Departments of Homeland Security, Justice and State, and the director of national intelligence, have formed an inter-agency group for the express purpose of dismantling transnational criminal cartels. The handcuffs have been removed from our prosecutors, and they’re targeting the drug dealers and gang members who prey on our citizens — and they’re working to eradicate the violent cartel MS-13. The change on defense has been profound as well.

The Defense Department has begun to rebuild and restore our military readiness. We’ve reasserted American leadership by holding the Bashar al-Assad regime in Syria accountable for its monstrous use of banned chemical weapons against helpless, innocent civilians. Our successful missile strike enforced the red line that the previous administration drew but ignored, thus restoring our credibility with our friends and our deterrence with our foes.

Finally, NATO countries are starting to pay billions of dollars more since I have made clear that the United States expects all of its allies to pay their fair share. I delivered on one of my biggest promises, appointing and confirming a new justice to the Supreme Court who will be faithful to the U.S. Constitution.

This is the first time a new justice has been confirmed in the first 100 days in 136 years. As we’ve made these changes — on the border, on our economy, on our security — confidence has soared. And a survey of manufacturing reveals record-breaking optimism in the future. Consumer confidence hit a 16-year high .

Thousands of new jobs are being re-shored back to America — including jobs at Ford, General Motors, Fiat Chrysler, Sprint, Intel and so many more.

We are proving that Buy and Hire American isn’t just a slogan — it’s now the policy of the U.S. government. It, along with the many other things we are doing, will Make America Great Again. No longer will we listen to the same failed voices of the past who brought us nothing but war overseas, poverty at home and the loss of companies, jobs and our wealth to countries that have taken total advantage of the United States. The White House is once again the People’s House.

And I will do everything in my power to be the People’s President — to faithfully, loyally and proudly champion the incredible citizens who love this nation and who call this God-blessed land their home.