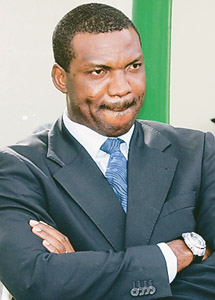 A former Super Eagles coach, Augustine Eguavoen, has officially been unveiled as the new manager for Nigeria Professional Football League side, Sunshine Stars.


The contract signing formalities and unveiling ceremony was held on Tuesday in Akure, the Ondo State Capital.

The management of the Ondo State club stated that the choice of Eguavoen was not far-fetched outside the fact that they wanted a capable and experienced hand that could help improve the fortunes of the Akure Gunners who are currently in the relegation zone on the league table.

The 51-year old soccer tactician has also handled local sides like Bendel Insurance, City Of David, Sharks FC (which has since metamorphosed into Rivers United) as well as Enyimba international who he led to Federation Cup triumph in the 2008-09 season.

Sunshine at the moment are precariously occupying the 17th position on the NPFL log and are hoping for better fortunes in the second half of the season with the coming of the former Super Eagles coach.