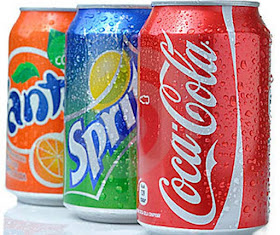 They are killing us slowly in Nigeria, and we do not know.

Apparently, for 9 years, a civil law case has been going on against Coca-Cola Bottling Company, manufacturers of Fanta and Sprite,

That impacts directly on our health and lives.

Let me try and paraphrase it, so una no go sleep off.

Basically, one Dr Fijabi, had in 2007, bought about N12 million worth of Fanta and Sprite drinks from Coca Cola Ltd, and exported same to the United Kingdom. However, on reaching England, under Health and Safety regulations, the authorities tested the products and found them to contain "poisonous levels of Benzoic Acid and Sunset addictives", and were therefore declared "unfit for human consumption". The whole export consignment was consequently destroyed.

Dr Fijabi therefore, sued Coca Cola for Negligence, breach of duty of care to its customers, and loss of earnings.

Now comes the interesting part, so sit your yansh well :

The Almighty Coca Cola offered only one defence in court: That Mr Fijabi did not tell them he was going to Export the Fanta and Sprite to England; that they were indeed manufactured "FOR LOCAL CONSUMPTION ONLY."

So what Coca-Cola Bottling Company is telling us, is that, if they knew the Fanta and Sprite were to be exported to England, they would not have added so much poisonous acid; But for the people of Nigeria, it is normal to poison us.

That is the official courtroom statement of Coca-Cola Bottling Company of Nigeria.
Yesterday, The Lagos High Court under Justice Adedayo Oyebanji, was 'crying' when she gave judgement against Coca-Cola, declaring them callous and negligent.

She 'cursed the parents' of NAFDAC for not carrying out proper laboratory checks on 'minerals' production in Nigeria.

Cancer was listed as one of the ailments that the present Fanta and sprite can cause, especially if taken with Vitamin C tablets.

She therefore, ordered Coca-Cola to henceforth add a WRITTEN WARNING on Fanta and Sprite bottles that "this product must not be taken with Vitamin C."

Once again, Oyinbo has come to our rescue.

This is the stuff you people in Nigeria should concern yourselves about, NOT Sulaimon and Otobo sex scandal.