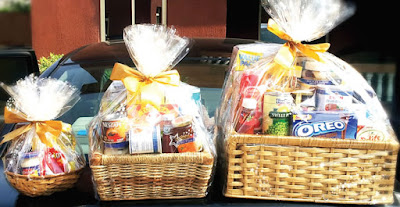 Charity Onoh, 57, had high expectation since the 15th of December 2016. Even as a procurement officer in a private firm based in Lagos, Onoh usually has cause to smile as most of the clients/contractors she helped to facilitate and fast forward their contracts and proposals during the year, would always show some kind of ‘appreciation’ this period by giving her hampers, bags of rice and many other gift items during this yuletide.


But the month had clocked 20th and Onoh had yet to receive a Christmas card, let alone hamper or rice.

As a procurement officer in the establishment, Onoh said her salary wasn’t so fantastic but she had always looked forward to the end of the year because she had come to depend solely on the gift items she would usually receive this period in order to have a ‘good’ Christmas for her and her family of five.

“I knew things are hard,” she told Saturday Punch in a chat recently. “But I knew Christmas hampers would always come, people I had helped push their files and proposals to the management would always ‘see’ me and ‘reward’ me for my ‘help’ every Christmas.

“The provisions in the so many hampers I get would be enough to set up a mini supermarket. They usually last us for close to two months if not more. I guess the so called recession has affected hampers this season,” she said.

However, Onoh said her spirit became elated when one of their contractors who is into agriculture and such related venture, brought an ‘innovative’ hamper to her on December 21.

“It was something I hadn’t seen before. In the big basket were four big tubers of yam, a bunch of plantain, some bulbs of onions and some potatoes neatly packed.  The basket also contained 1kg of rice. I was so impressed. It is not like the usual hamper that contained biscuits and milk and beverage. This is really what I needed and I was happy with it,” she said.

But it seems not just a few know about this ‘Nigerian hamper’ or ‘Recession hamper’ as most people have tagged it. A nurse, Sandra Ubochi, who is a matron in one of the hospitals in Lagos, also said she received such hamper few days ago.

“Mine wasn’t in a basket anyway but in a basin.  It contained tubers of yam, dried abacha (cassava flakes), pineapples, potatoes and a 5kg of groundnut oil. I was so surprised because this was my first time of seeing such innovation. And in these difficult times, the food items actually came in handy. It was a lot better than the usually biscuit and margarine and such like that we see in everyday hamper,” she said.

A patient at the hospital who overheard the discussion Ubochi was having with our correspondent, also claimed she had received such hamper few days ago.

“I was equally surprised when I got mine. At first, I felt it looked fetish but then, I concluded it was creative and what people really need this period. Food is scarce and expensive. This is an inspiration we ought to promote at every opportunity we get. We should always promote our own and not swallow and imitate everything the Westerners bring to us.

“Who needs wine on empty stomach? What will I be doing with cabin biscuit and cornflakes when my stomach is groaning with hunger? It is just that we don’t appreciate our own concept in Nigeria. By the time you add one or two ingredients to the items in the hamper, a meal is set and you will eat and be full rather than take meals meant for cats and mice,” she opined.

And even in recent times, pictures of such  hampers have gone viral on the Internet with so many people marvelling at such creativity and concept especially this period of dearth.

Commenting on an Instagram handle where one of such ‘Recession’ hampers was posted, with the handle, Ugo Personified,  the Instagram user said he would prefer such hamper any day.

“Wow! This is super! I would rather have this than all those expired wines and tins of food that we don’t know when they were canned. This is the best gift anybody can give me this Christmas. It is so much better than what we are used to,” she commented.

She wasn’t the only person that favoured the ‘Recession’ hamper. Another person with the handle, ‘President’s son’, also said he had fallen in love with the latest concept.

“This is an African inspired hamper and it is so cool. If you use the fowl to make hot and spicy yam pepper soup, your day is made and you already have a yummy Xmas. Is there anyway anybody would eat cornflakes or those sweet biscuit for Christmas. This is the real deal. I just wish somebody would give me this for Christmas,” he said.

Meanwhile, as Saturday Punch was able to track down Joseph Phillips, one of the persons who took the step to give out such hampers,  the young farmer said he didn’t see the idea anywhere but decided to give out what he had to try a new concept.

“This year has not been bad for me. I invested in agriculture and farming and animal husbandry and it yielded dividends this year. So I felt it wouldn’t be a bad idea to give out and appreciate people with products from my farms and livestock.”

When asked how much such hamper would cost, Phillips said, “Remember I got most of these items from my farm and poultry. If I should put a price to all that is contained in the basket, it couldn’t be more than N15, 000. A tuber of yam I think goes for at least N600 and I include like four of the yams. The fowl is not up to N3000. I included some reasonable quantity of potatoes which is also less than N1000 and then the bunch of plantain which costs less than N800. So I even think this food hamper is cheaper than the regular hamper.

“All the people I gave this hamper were pleasantly surprised and happy. It is just away from the norm. This is a way of encouraging the agricultural sector and also diversifying our economy. All the products are natural. If such hampers are encouraged and appreciated more, I am sure it would become bad business for the usual hamper sellers and everybody may embrace this concept,” Phillips said.

And indeed, Phillips may not be far from the truth by saying such novel concept may become bad business for the regular hamper sellers.

A visit to some markets and stores across Lagos by our correspondent showed that it has not been cheese and honey for the regular Christmas hamper sellers.

At an upscale shop situated at a street off Adeola Odeku Street on Victoria Island, Lagos, several hampers were on display and for the one hour or more our correspondent stayed at the shop; no single buyer bought at least a hamper.

Confiding under anonymity to our correspondent, one of the sale girls said it had been like that since the beginning of the season.

“But this is expected, Things are not moving as before. People no longer buy hamper like before. Today is 20 December and the hampers we packed since the beginning of the month are still what we have on display. Before, we even employed people whose job is just to be filling the baskets with items and wrapping them,” he said.

At the Balogun Market also on Lagos Island, the story is not different. Hundreds of hampers were on display but the patronage has not been so encouraging.

Vera Babafemi, who manages her mother’s shop on Breadfruit Street at the Balogun Market, said they have been worse hit this year since they started the hamper business over 12 years ago.

“It has never been this bad. This is the first time we would have hampers and they are not cleared by customers. This particular hamper (pointing at a basket) used to be N20, 000 but it is N35, 000 now.  In fact, we are running at a loss at that price. Even at that, people are not buying.

“With the way things are now, I know that a lot of people would prefer if such amount of money is given to them. But this is a ritual we have been doing over the years, we didn’t know that business would be this poor this year. We thought that no matter what, people would still give out hampers.

“I am not saying we have not sold any. But the truth is that it has not been encouraging. People do come and once we tell them the price, they shake their heads and walk away. If by the end of the year we don’t sell them, we have to put them back in the shelf and sell the items in pieces,” she said.

When asked why they have not explored the ‘Recession’ hamper concept, Vera said they do it based on order.

“Some people do suggest what they want us to put in the basket and we do just that.”

Saturday Punch findings reveal that the ‘recession hampers’ are not readily put on display but sold on request.

One seller told our correspondent that buyers complain of their inability to afford the expensive items packaged in the regular hampers.

“When they come in, they price everything on display. At the end of the day, they express disappointment that almost all the goods  in the market have gone up by about 100 per cent.

“But determined to manage what they have, they tell us what they want. Instead of the beverage and the wines and foreign cookies, they tell us to to package local food items like yams, garri and cassava flours. We try our best to satisfy them but we don’t readily have the hampers because of the perishable nature of the items.

Apart from getting an average ‘recession hamper’ for as low as N10,000, buyers appear to be satisfied with the food items.