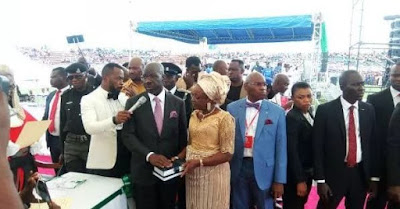 The Samuel Ogbemudia stadium, Benin, was filled to capacity as the new Governor of Edo, Mr Godwin Obaseki took oath of office on Saturday.


The main bowl of the stadium was filled to capacity as well-wishers, associates, friends and family members thronged the stadium to witness the ceremony.

Among the dignitaries, who were at the event, which also marks the end of Adams Oshiomhole’s two terms as governor of the state, was the Senate President, Dr Bukola Saraki. Some others were Alhaji Aliko Dangote; Gov. Mohammed Abdulahi Abubakar of Bauchi State; Gov. Akinwunmi Ambode of Lagos State; Gov. Ibikunle Amosun of Ogun; and the All Progressives Congress governorship candidate in Ondo, Rotimi Akeredoolu.

Also at the event, were former military Head of State, Dr Yakubu Gowon, and a host of ministers such as that of the Ministry of Information and Orientation, Alhaji Lai Mohammed.

Obaseki, the All Progressives Congress (APC) party candidate in the Sept. 29 gubernatorial election in Edo State, won the two-way contest with the Peoples Democratic Party (PDP), winning most of the votes.

Pastor Ize-Iyamu of PDP came second in the votes collated and announced by INEC. After collating the results across the state, INEC said APC won 13 of the state’s 18 local government areas.