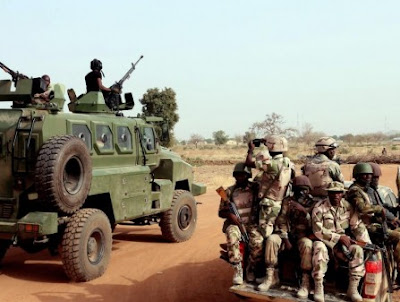 The Nigerian Army says it is closer to ending the Boko Haram insurgency with the capture of the group’s last strongholds in Northern Borno.

He said the capture of the terrorists’ last stronghold in Northern Borno was a pointer to the level of success recorded by the army.


“As you know, Malamfatori is in our kitty; our troops are consolidating on the capture of Malamfatori, Abadam and Gashigar,” Irabor said.

“The last time we met I told you that we were looking forward to capturing these areas which were the last strongholds of the Boko Haram terrorists; that we have done successfully.”

Irabor said that since the September 27 capture of the areas, the army had consolidated its position by keeping the place safe.

He however expressed regret that the army lost some soldiers and equipment in the battle for the areas.

He said, “Let me state that our capturing the area is not without cost, we have lost both lives and equipment.

“What I can tell you is that even though we lost a few soldiers, those wounded are in stable conditions in hospital, the equipment damaged have been repaired and returned to service.”

He attributed the loss to the use of Improvised Explosive Devises by the terrorists.

“In the cause of the operation, we have the issues of IEDs which the terrorists used on the road which cost damage to our vehicles. By and large we have cleared them from the area,” Irabor said.

He explained that the success did not, however, imply that the Boko Haram terrorists had been cleared finally.

“But that does not mean that we will not hear from the Boko Haram terrorists again.

“No; there are other areas that we have not completed our operations, places like the Sambisa Forest.

“Of course there are several aerial bombardments going on right now that I will not want to talk about, there are other areas our troops are carrying out operations too,” Irabor said.