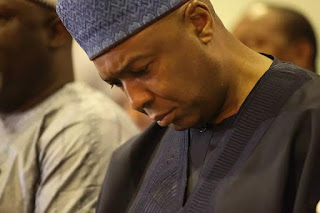 The Court of Appeal sitting in Abuja, Thursday, reserved judgment in an appeal the embattled Senate President, Dr. Bukola Saraki lodged against his trial before the Code of Conduct Tribunal, CCT.


A five-man panel of Justices of the appellate court led by Justice Abdul Aboki, okayed judgement on the appeal marked CA/A/172c/2016, after it heard arguments from Saraki’s lawyer, Chief Kanu Agabi, SAN, and counsel to the Federal Government, Mr. Rotimi Jacobs, SAN. Saraki had gone before the appellate court to query the legal propriety of the 16-count criminal charge the federal government entered against him before the CCT.

He is challenging jurisdiction of the Justice Danladi Umar-led tribunal to try him on the basis of a charge he said was incompetent and legally defective.

The charge borders on his alleged false/anticipatory declaration of assets, money laundering, operation of foreign accounts while in office as the governor of Kwara State and allegation that he collected salaries as a governor, four years after his tenure had elapsed.

Saraki’s lawyer, Agabi, SAN, while arguing the appeal, prayed the appellate court to set aside a ruling the tribunal delivered on March 24. The tribunal had in the said ruling held that it has the requisite jurisdiction to hear and determine the case against the Senate President.

The two-man panel tribunal had also declined to suspend further proceeding on the matter to await the outcome of the appeal dated April 4. However, in his nine grounds of appeal, Saraki contended that he was denied fair hearing by the Code of Conduct Bureau, CCB, which he said did not give him the opportunity to clarify alleged discrepancies in the assets he declared as a public officer.
He further challenged the powers of the Attorney General of the Federation to usurp the function of the CCB, by personally endorsing the charge pending against him before the tribunal.

It was his argument that the AGF lacked the powers to initiate charges before the CCT.
More so, Saraki told the appellate court that he was not served a pre-action notice, which he described as a condition precedent before a charge is entered against anyone at the CCT. He queried action of the government in filing charges against him, 13 years after he had exited office as a governor.

Meantime, FG urged the appellate court to dismiss Saraki’s appeal which it said not only lacked merit, but also constituted an abuse of the judicial process. FG, through its lawyer, Jacobs, SAN, also filed a cross-appeal against the March 24 ruling of the tribunal. It maintained that the tribunal failed to make findings on its allegation that the second motion Saraki filed to quash charges against him and to challenge jurisdiction of the CCT to try him, amounted to an abuse of court process.

It was position of the government that since the issue of jurisdiction was earlier decided by the Supreme Court on February 5, following an appeal by Saraki, the tribunal ought not have entertained another application on the same issue.

It therefore prayed the court to among other things, determine whether the decision of the tribunal contained in its ruling of March 24, 2015, is a nullity by virtue of the provision of section 294(3) of the 1999 constitution, as amended.

“Whether the CCT is not right in holding that the appellant need not be invited by the CCB to make a written admission of the breach of code of conduct pursuant to section 3(d) of the CCB and Tribunal Act, before he can competently be charged before the CCT.

“Whether the AGF did not competently and validly initiate the criminal charge pending before the CCT against the appellant. As well as, “Whether the CCB cannot competently collaborate with the AGF and the EFCC in its duty to investigate asset declaration form submitted to it by public officer and in referring to complaint of infraction to the CCT”.