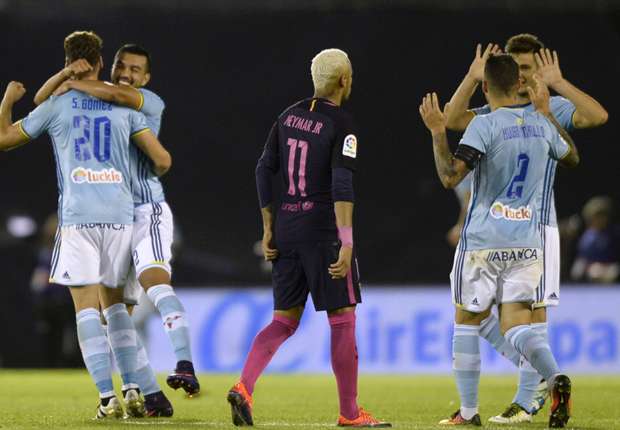 Barcelona endured a defensive horror show in Vigo as Celta ran rampant to beat the defending Liga champions 4-3 on Sunday.


Real Madrid's home draw against Eibar earlier on Sunday had opened the door for the champions to take first place, but they instead endured a miserable evening at Balaidos in a thrilling encounter.

Celta have beaten Barca in each of the last two seasons – including a 4-1 home victory last season – and raced into a three-goal half-time lead.

Pione Sisto opened the scoring following a mistake from Ter Stegen, before two goals in the space of 86 seconds – an Iago Aspas strike and an own goal from Jeremy Mathieu – rocked the visitors.

Luis Enrique's side launched a comeback after the break, with Gerard Pique's header and a Neymar penalty setting up a grandstand finish, but Ter Stegen blundered again for Pablo Hernandez's match-clinching header.

Pique did net another header in the final moments, but the hosts held on and Eduardo Berizzo now has three LaLiga victories over his Celta predecessor Luis Enrique – a man no other manager in Spain's top-flight has beaten more than once.

And Barca have now lost two of their first seven games to sit fourth in the early season table, two points behind leaders Atletico Madrid and Real.

Barca had the first chance of note when Luis Suarez drilled a low effort straight at Sergio Alvarez, but it was the home team who opened the scoring in the 22nd minute.

Ter Stegen's loose pass to Sergio Busquets led to Aspas' precise throughball finding Sisto – who also scored last week against Espanyol – and he calmly took one touch before converting with a low finish.

After 31 minutes, it was two. A long clearance from Hugo Mallo was not dealt with by Barca's defence and Pique inexplicably gave Aspas all the time he needed to dribble to the edge of the area and drill a left-footed effort into the far corner.

Astonishingly, Celta were celebrating a third goal moments later. More panic in the away backline gave Daniel Wass the chance to send in a cross from the right looking for Aspas, but Mathieu – back in the team as one of four changes – got there first and inadvertently diverted his attempted diving clearance past Ter Stegen and in.

Luis Enrique brought on Andres Iniesta for his 600th club appearance in place of Rafinha at the break and it was his dipping cross from the left which set up Pique's thumping header after 58 minutes, with Alvarez failing in his attempt to get there first.

All of a sudden, the momentum was with Barca and within six minutes they had another goal back.

Andre Gomes was bundled to the ground by a combination of Nemanja Radoja and Mallo, with Neymar sending Alvarez the wrong way from the resulting spot-kick for his fourth LaLiga goal of the campaign.

Neymar wanted another penalty, but his claim was denied despite protesting that home captain Mallo had tugged him to the ground.

Celta struck again 13 minutes from time when Ter Stegen collected a backpass from Jordi Alba and proceeded to chip an attempted pass straight against the head of Hernandez, who – along with a jubilant home crowd – could not believe his luck as the ball bounced in.

Ter Stegen did make a key save when Aspas had a golden chance to make it five and that allowed Barca to revive hopes of a recovery again when impressive play from substitute Denis Suarez down the right set up another Pique header, this one from close range.

The visitors had two decent chances to seal a remarkable draw after that 87th-minute goal as the drama continued right up until the final whistle.

Neymar headed a chance wide from Arda Turan's cross, before Pique almost made it a hat-trick of headers, failing to find the target from another Denis Suarez delivery as a night to remember ended with Celta celebrations.