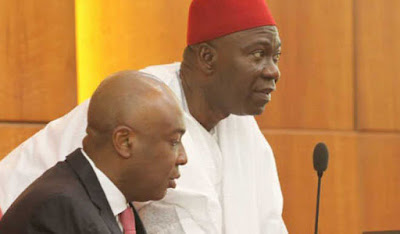 The arraignment of the embattled Senate President, Bukola Saraki and his Deputy, Ike Ekweremadu on criminal conspiracy and forgery of the Senate Standing Rules in 2015 which has been slated for today in Abuja has been stalled as court officials confirmed that the two presiding officers of Senate have not been properly served with the charges.

The two principal officers were to appear before a Federal Capital Territory High Court in Abuja over alleged criminal conspiracy and forgery of the Senate Standing Rules that brought them to office in 2015.

The Federal Government had, through the office of the Attorney General filed the charges Saraki and Ekweremadu as well as former Clerk of the National Assembly, Alhaji Salisu Abubakar Maikasuwa and his deputy, Mr. Benedict Efeturi.

Saraki will, however, appear today before the Code of Conduct Tribunal (CCT) where he is standing trial for an alleged false declaration of assets.