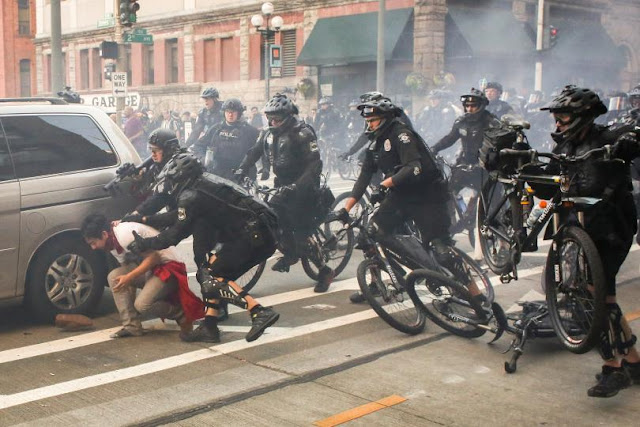 At least nine activists were arrested and five police officers injured when a May Day protest turned violent in the northwestern city of Seattle, police said.


Protesters smashed windows, set off fireworks and flares, and hurled rocks, bricks and homemade fuel bombs as they clashed with police on Sunday in downtown Seattle, Washington state.

One officer sustained head injuries from a rock, another was struck by a Molotov cocktail that did not explode, and another was bitten, the Seattle police department said on Twitter late Sunday.
Of those arrested, eight were men and one was a woman. All were between the ages of 20 and 32.

In a statement, Seattle Mayor Ed Murray said it was “unfortunate and deeply regrettable” that some people had chosen to “engage in senseless acts of violence and property destruction.”

The city deployed a massive number of officers in riot gear on foot, on bicycles, on horseback and in vehicles to manage the crowd which began to gather late on Sunday afternoon, the Seattle Times reported.

Police successfully herded a mob of several hundred protesters dressed in black out of the city’s business district in what the newspaper described as a choreographed rolling blockade.

Last year, police arrested 16 people in raucous May Day demonstrations but were criticized for using excessive force, the Times said.