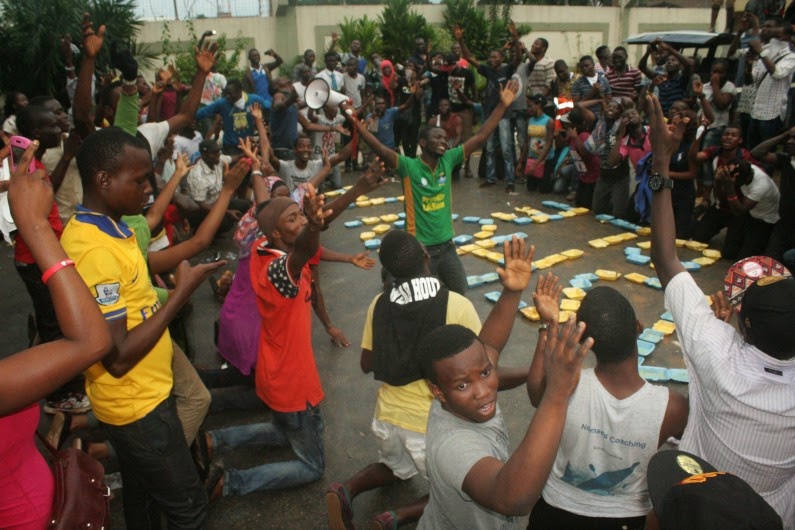 Policemen on Tuesday chased away hundreds of Lagos State University, LASU, students who were protesting the hike in school fees at the Lagos Governor’s Office with teargas and guns.

They sang anti-Fashola songs for several minutes before the police swooped on them following an order by the RRS Commander, Hakeem Odumosu who told his men to arrest and disperse the protesting students.

The policemen shot sporadically into the air and released teargas right in front of the Governor’s office, an action that made the students scamper in different directions, leaving some injured and requiring medical attention.

The policemen chased the students unto the Lagos-Ibadan Expressway until they hurriedly crossed the expressway and pitched their tent at the Magodo Gate. Other students who had run in different directions returned to join them at the Gate.

Police officers with guns were seen searching for LASU students to arrest while the road leading to the governor’s office from the Lagos State House of Assembly was barricaded by police vans.

President, LASU Students Union, Yusuf Nurudeen told PM NEWS at Magodo Gate, Lagos, Southwest Nigeria that they came to the Governor’s Office to know why the State Government had not announced reduction in fees being paid by the students after the Committee set up by Fashola submitted its report on Monday.

“We also learnt that the government will be meeting with the Governing Council of the school today and that is why we came. We beat the barricade set up by the police and we were singing peacefully at the entrance of the governor’s office when we saw policemen.

According to him, about three students were injured and had been rushed to the Lagos State University Teaching Hospital, LASUTH, while two others were arrested, saying that “they pursued us from the governor’s office to Magodo Gate. We will continue to protest.”

However, Lagos Commissioner for Information and Strategy, Aderemi Ibirogba said the State Executive Council was yet to conclude on the school fees issue, saying that the decision will be made Wednesday.