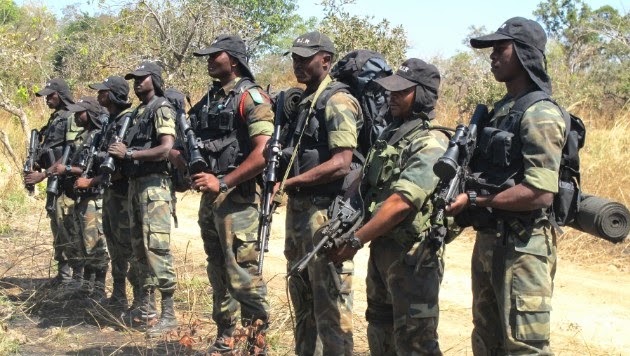 As the militant Islamic sect, Boko Haram continues its incessant attacks in Nigeria; Cameroon has successfully been resisting the sect in its territory.

Reuters reported on Sunday that Cameroonian troops killed two members of the sect on Saturday.

The number of the sect members killed barely within one week in Cameroon has increased to 102.


Cameroon had deployed 1,000 troops along its border with Nigeria after more than 200 girls were kidnapped by the sect at Chibok Borno State.

It had killed 40 members of the sect on May 31, 2014 shortly after two Italian priests and a Canadian nun were released in the town of Kousseri.

On Wednesday, Cameroon also killed 60 members of the Boko Haram in its territory 24 hours after the sect raided three villages of Danjara, Agapalwa and Antagara in the Gwoza Local Government Area of Borno State killing more than 300 people.

According to the VOA, the 60 sect members were killed by Cameroonian troops in the villages of Dabanga in far northern Cameroon, when they crossed from over from Borno State, Nigeria.

The sect members were ambushed by Cameroonian soldiers the report said.

Fonka Awah, the governor of the far north region of Cameroon, said his office had received information that some Boko Haram members might be hiding in Cameroonian villages, and asked for specialized troops to be deployed.

“Of course yes, without mincing words, after such a situation you reassemble the forces and map out strategies, you galvanize them and put them back into action and I think that is what we have just done,” he had told the VOA.

Nigeria has accused Cameroon of not doing enough to tackle Boko Haram, which grabbed global attention in April by kidnapping more than 200 girls from a school and has killed hundreds of civilians in northern Nigeria since then.

Cameroon deployed 1,000 troops to the far north and the attack in the Mayo Tsanaga Division in the Far North Region is the latest in a series of clashes between Cameroon security forces and the group.

Cameroon government spokesperson Issa Tchiroma Bakary said a raid was carried out early on Saturday morning by 50 well-armed gunmen believed to be members of Boko Haram.

“Our defence and security forces fought back immediately. (They) killed two of the assailants, seized one of their vehicles and a Kalashnikov war weapon, forcing them to run back crossing the border into the Nigerian territory,” he said.

He did not say if any government troops were killed or wounded in the fighting.

Boko Haram has waged a five-year campaign of attacks on civilians and security forces in northern Nigeria but the mass kidnapping of the girls in April focused world attention and drawn pledges of a regional coordinated push against them.

A number of Westerners have been kidnapped in Cameroon’s remote north over the last year but Yaounde has until now adopted a low-key response to the threat from across its long border with Nigeria.

Nigeria’s head of counter-terrorism said last month Cameroon was the weakest link in the regional fight against the group.

Before Cameroon deployed troops along its borders, the sect had been fleeing to the West African country after carrying out attacks in Nigeria.