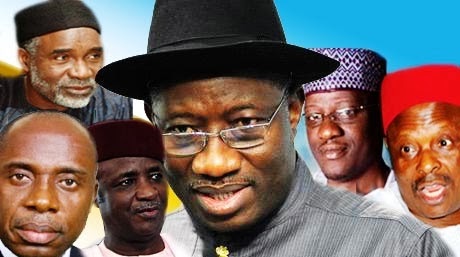 Five former governors of the Peoples Democratic Party, PDP, who defected to the All Progressives Congress, APC, last December, yesterday, asked President Goodluck Jonathan to stop regretting their exit, but to find urgent answers to the problems bedevilling his party and Nigeria.

The governors of Adamawa (Murtala Nyako), Rivers (Rotimi Amaechi), Sokoto (Aliyu Wamakko), Kwara (Abdulfatah Ahmed)and Kano, (Rabiu Kwankwaso) said they had left the PDP for good and were not considering returning to their former party because of the high level of impunity and injustice, which drove them away to APC.

The governors, who disagreed with the President that they were the cause of PDP’s problem, advised him and the leadership of the PDP to take their eyes off them and concentrate on their own party members and issues as they were no longer part of the PDP.

President Jonathan, had while addressing a PDP rally in Minna, the Niger State capital on Saturday, described the five governors who defected from the PDP as the cause of the party’s problems and said that it was good that they exited from its fold.

The President, who also likened the five governors and other defecting politicians to chameleons, said such politicians should not be trusted, as they continued to change their platforms.

But in replying Jonathan, the governors accused him of presiding over a party that adopted impunity, lawlessness and injustice as a manifesto and treated Nigerians with disdain all in a bid to satisfy the interest of a few elements within its fold.

The governors, who spoke through the Adamawa State Governor, Murtala Nyako, noted that Jonathan had through his leadership style and his party done more than anybody else to make people to turn political chameleons either through direct inducement or through high level of impunity and injustice.

The governor, who spoke through his Director of Press and Public Affairs, Mr. Ahmad Sajoh, said President Jonathan was pained that he lost five governors at once to a more responsible party and that the APC was sure of victory in 2015 to end the 16 years of lawlessness perpetuated by the PDP in Nigeria.

The governors said, “We want to plead with Mr. President to stop bemoaning over our defection from the PDP. Indeed, our advise to him is to begin to look inwards and see what is wrong with his party and Nigeria and find answers to the challenges rather than continuing to mourn over our departure from a sinking ship called PDP.

“If we were the problems of the PDP as the President claimed, we wish him and his party goodluck now that we have joined forces with the other party to rebuild Nigeria and meet the needs of Nigerians who have been suffering in the last 15 years under his party.

“While consoling him over the loss of governors and other party members to the opposition, we plead with him to act as the leader of Nigeria by treating all Nigerian citizens with respect irrespective of party platform, tribe or religion and stop playing politics with everything,” the governors pleaded.

The governors have ruled out the possibility of returning to the PDP despite repeated pleas by the National Chairman of the party, Alhaji Adamu Mu’azu, who disagreed with President Jonathan’s attack and pleaded with them to return to the PDP.