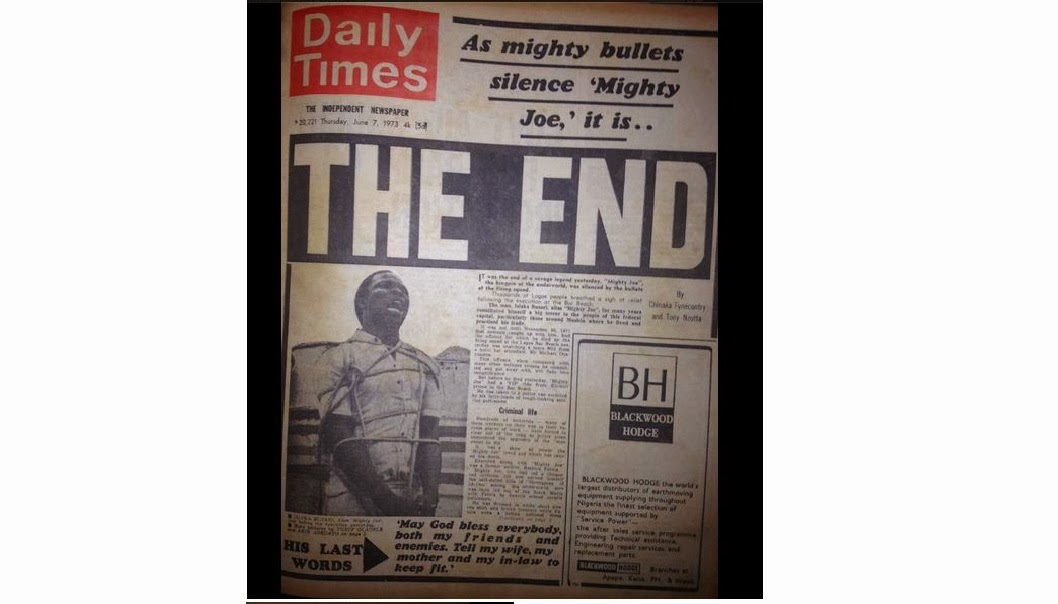 It was the end of a savage legend yesterday. ‘Mighty Joe’, the kingpin of the underworld was silenced by the bullets of the firing squad. Thousands of Lagos people breathed a sigh of relief following the execution at Bar Beach. The man, Isiaka Busari, alias ‘Mighty Joe,’ for many years constituted himself a big terror to the people of this federal capital particularly those around Mushin where he lived and practised his trade.

It was not until November 30, 1971 that nemesis caught up with him. And the offence for which he died by the firing squad at the Lagos Bar Beach yesterday was for snatching a mere N10 from a hotel bar attendant, Mr. Michael Osayunana.

This offence, which compared with many other heinous crimes which he committed and got away, will fade into insignificance. But before he died yesterday, ‘Mighty Joe’ had a VIP ride from Kirikiri Prison to the Bar Beach. He was taken in a police van escorted by six lorryloads of tough-looking anti-riot policemen.

Hundreds of motorists -many of them workers on their way to their various places of work, were forced to clear out of the road as police siren announced the approach of the man about to die. It was a show of power which ‘Mighty Joe’ loved and which caused his doom. Executed along with ‘Mighty Joe’, was a former soldier, Bashiru Fatola. Mighty Joe, who had led a chequered criminal life and earned himself the self-styled title of ‘Strongman of Idi Oro’, among the underworld men, was then led out of the Black Maria with Fatola by heavily-armed mobile policemen.

Mighty Joe’s last words: May God bless everybody, both my friends and enemies. Tell my wife, my mother and my in-law to keep fit.

NB: Mighty Joe converted to Islam after his conviction and even offered prayers that the execution be reverted. That was never to be

Some people believe that Mighty Joe was killed on trumped-up charges. Some even believe that he was not even an armed robber but a common street thug (what we now call an Area Boy) who was killed to clear the path for some. Such people claim that the Daily Times was partly owned by the Federal Government and the wealthy Alakija family of Mushin. Mighty Joe was said to have had a tussle with one of these prominent families who then set him up and ensure he was executed. For some, especially, those who grew up in his neighbourhood in the era of Mighty Joe, he is still regarded as a legend of sorts.