MURDER: APC, Fayemi plot to implicate me – Bamidele cries out 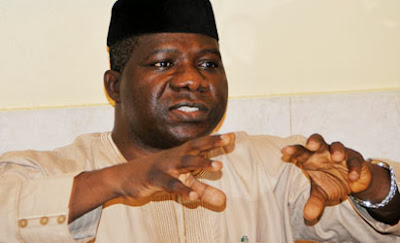 A House of Representatives member and Labour Party gubernatorial aspirant in Ekiti State, Hon. Opeyemi Bamidele has alleged a grand ploy by the ruling All Progressives Congress, APC, to frame him up on trump up charges over the rumoured attempt on the life of the security aide to the governor, Mr. Deji Adesokan.


He called on the Inspector-General of Police, the Director-General of the Department of State Services, DSS, and other relevant security agencies in the country to investigate and sanction those found culpable in the allegation, saying none of those arrested over the matter has a link with him.e

Afolabi Oyediran and Oluwafemi Sunday were arrested within the premises of Deji Adesokan, a Senior Special Assistant to the governor on Internal Security about two weeks ago with arms.

A statement signed by Ahmed Salami, media aide to Bamidele in Ado Ekiti, yesterday, accused the APC and Ekiti government of desperately contriving sinister means through which they could negotiate for the withdrawal of cases pending in court against Interim Chairman of the party, Mr. Jide Awe and nine alleged killers of Bamidele’s loyalist, Mr. Foluso Ogundare.

According to Bamidele, it was incongruous and smack of deceit and ignorance for the APC members to have linked him with the two accused persons, when no such information was contained in their statements to the police or affidavits deposed to in court.

“Given the mischievous way the story was presented to the public, it is important for us to put the record straight to avail the members of the public an opportunity to know the truth of the matter.

“In the first instance, the governor’s aide Deji Adesokan (aka Jaruu) is a notorious persecutor of perceived opponents of Fayemi who would stop at nothing to implicate, intimidate, harass and, where he can, outrightly kill to ensure a second term tenure so desperately desired by Governor Olukayode John Fayemi in spite of the increasing rejection by well-meaning Ekiti people who are insisting that they can- not be fooled more than once.

In his reaction, the APC spokesman, Mr. Segun Dipe said the present state government and the party has no time for frivolity and triviality.

His words: ”It is quite unfortunate that Bamidele who is a legal practitioner is trying to give an impression that judiciary is compromising.

“For APC and government of Ekiti State, our focus is 2014, we don’t have time for frivolity and triviality,” Dipe concluded.