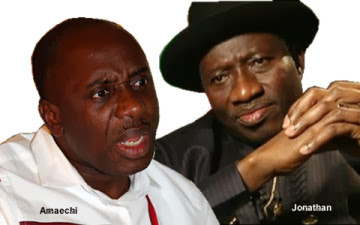 The Rivers State Governor and Chairman of the Nigerian Governors’ Forum, Mr. Rotimi Amaechi, has given President Goodluck Jonathan one condition to return to the Peoples Democratic Party.

Amaechi said he was ready to go back to the PDP if Jonathan would return Rivers oil wells ceded to neighbouring Bayelsa State.

The governor, who spoke on Monday during a rally organised by the All Progressives Congress at the Liberation Stadium in Port Harcourt, said despite the 2.1 million votes Jonathan received in the state in 2011, the Federal Government had not executed any project in Rivers.

He dismissed claims that the ceding of Rivers oil wells in Soku to Bayelsa State was done during the tenure of former Governor Rufus Ada George.

Amaechi said, “We gave the President nearly 2.1 million votes. Let him tell us one project he has done for us. I have challenged the President that I belong to APC. If he wants me back in PDP, let him return the oil wells to the Kalabari people and I will come back.

“But the President cannot. Instead, he will take more. One of our sons, a Kalabari son, said the oil wells were taken under Rufus Ada-George. Tell him I say he is lying. He never served in any government. I served under Ada-George government and there was no oil well taken from Rivers State then.