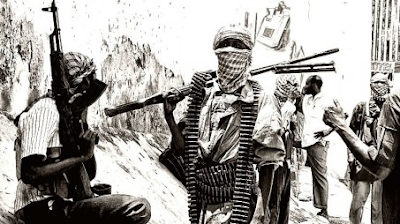 
The group,in a report on Thursday, also criticized the federal government for failing to account for hundreds of men and boys rounded up by security forces using emergency powers in the Islamic uprising.

The London-based organization quoted witnesses saying hundreds have died of dehydration, illness and beatings, while many other detainees have been executed.

It quoted commanders of vigilance groups describing the rescue of kidnapped women and girls in attacks on hideouts of the Boko Haram terrorist network. Some were pregnant and others had babies.

It did not spare the Civilian Joint Task Force whose emergence,it said , has “added a worrisome new dimension to the violence.”

Daniel Bekele, Africa director at HRW, said: “For a group that claims to be religious, Boko Haram’s tactics are the most profane acts we can imagine.The killing and mutilation of ordinary Nigerians, the abduction and rape of women and girls, and the use of children for fighting are horrifying human rights violations.”

In the course of compiling the report, HRW claimed to have interviewed more than 60 victims, witnesses, medical personnel, members of local rights groups, Civilian Joint Task Force commanders and government officials over nine days in Kano and Maiduguri.

Its words:“Commanders of the Civilian Joint Task Force, working with security forces, said that they had rescued 26 abducted women and girls from a Boko Haram stronghold in Maiduguri and later in Sambisa Forest. Some of the women and girls were pregnant; others had babies. The commanders told Human Rights Watch that a number of the girls had been abducted while hawking wares on the street or working on farms in remote villages. Many girls who were rescued or had escaped were sent off by their families to distant cities like Abuja and Lagos to avoid the stigma of rape or pregnancy outside of marriage, activists said.

“Several witnesses said they saw children in the ranks of Boko Haram during attacks. In Maiduguri, Human Rights Watch researchers saw a video recording of the interrogation by security forces of a 14-year-old boy who described the role he played in Boko Haram operations. Commanders of the Civilian Joint Task Force said they had freed numerous children during a 2013 attack on a Boko Haram base in Sambisa Forest.

Witnesses described Boko Haram laying siege to towns, villages and highways; looting and burning houses, shops, and vehicles; and executing and decapitating people, some of whom they accused of aiding the Civilian Joint Task Force. In July, the combined efforts of the security forces and Civilian Joint Task Force appeared to have pushed Boko Haram out of Maiduguri. Since then, the group has carried out numerous attacks in the nearby towns of Damaturu, Benisheikh and Gamboru.

Boko Haram’s September 17 attack on Benisheikh, 74 kilometres west of Maiduguri, killed at least 142 people and was the most lethal incident in Borno State since 2010. A man who went to Benisheikh to look for a colleague on the morning after the attack described what he saw at a checkpoint that had been set up by Boko Haram and that was crowded with burned vehicles:

“There were bodies all over… three here, two there, four near the next – all lying face down, dead next to their vehicle. Then I saw a long line of bodies… about 30 of them. But weirdly, one of the trucks was carrying cows which were still alive. Who are these people who kill the human beings, yet leave the cows standing?” he said.

Another witness described seeing about 20 women abducted during the September 17 Benisheikh attack. A health worker in Maiduguri told Human Rights Watch that he attended to a 15-year-old girl who had recently returned home pregnant several months after Boko Haram abducted her.