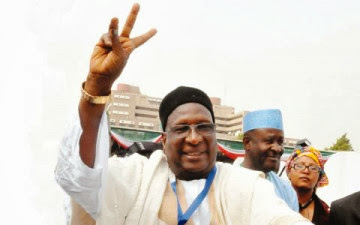 The National Chairman of the Peoples Democratic Party (PDP), Alhaji Bamanga Tukur, has appealed to members of the Abubakar Baraje faction to close ranks with the mainstream PDP, to enable the party forge a common front for the national dialogue.


In a statement he signed on Tuesday, Tukur said the ruling party would mobilise Nigerians from all walks of life, including opposition groups, for the success of the conference.

Tukur said the dialogue offers a life time opportunity for Nigerians to re-lay the foundation of the country, stressing that the nation would emerge as a true giant of Africa at the end of the exercise.

He said, “I appeal to members of the PDP to align with the President on the national confab agenda. I also appeal to our aggrieved members to return to the PDP for us to forge a common endeavour towards rebuilding the party and our country in particular.
“For this reason, I will not shy away from begging our party members to come together so we can enter the national confab like a team and set examples for the rest of Nigeria.

“In doing that, we would have demonstrated that we remain the most serious party, not only in Nigeria but in Africa”.
The chairman said the PDP was excited by the government’s desire to bring all ethnic nationalities in the country together for discussions on the progress and future of the country.

He commended President Goodluck Jonathan for responding positively to the yearnings of the Nigerian people for a national conference.
Tukur wondered why the idea of the conference was being criticised by certain individuals and groups in the country.

He described the critics as hypocrites, saying that many of them had severally called for the conference in the past and had mounted pressure on the President to set machinery in motion for the talks.

The chairman admitted that the ruling party is presently at a crossroads, a development which he said, is normal in democracies.
What is not normal, according to him, “is a situation where dissenting members resolve to permanently stand apart with little regard for the party’s starting line, past efforts in building the party, as well as common aspirations in raising the party to be the most formidable among all.”

Tukur restated his determination to pursue with vigour the revival of the ruling party and to put the country on the path of sustainable growth and development.