The First Story Building In Nigeria, a Shadow of Itself 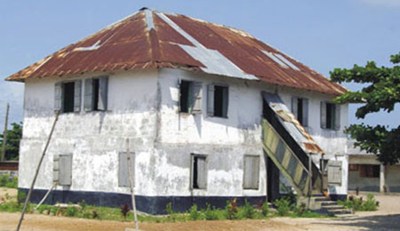 The first storey building in Nigeria, which was built in 1845 in Badagry, Lagos State is now a shadow of it's former self as it is in urgent need of renovation.

Investigation carried out by the News Agency of Nigeria (NAN) in Badagry reveals that the storey building is deteriorating and is in urgent need of repairs.


When the NAN correspondent in Badagry visited the storey building, the upper floor which is made of wood had holes in them and were shaking.

The staircase leading to the upper floor is rickety and one must be carefull while climbing the steps in order to ensure that the staircase does not collapse or fall.

The Bible store at the upper floor cannot be reached because the floor which is made of wood has been eaten by termites thereby making the wood fragile.
The building which is a major tourist site also has no electricity supply thereby making the building stuffy and uninhabitable.
An inside source revealed that the storey building had turned to a place where bats come to sleep. "The storey building lacks maintenance.
Its so bad that the building harbours bats.
"The part of the building where bats stays smells and these drives away tourist at times because the smell is very awful and dangerous to human health " the source revealed.
Venerable Dickson Ilegbusi, who is a priest at the Cathedral Church of Thomas, Badagry and also doubles as the curator to the first Storey Building noted that he was aware of the problems.
He promised that renovation would be carried out as soon as possible.
He said that the reason why renovation was being delayed was because the church did not want to temper with its originality.
"The Bishop is aware of these and renovation would be carried out as soon as possible.
"The reason why we have been delaying the renovation of the first storey building is because we do not want to tamper with its originality.
"Fumigation would be carried out soon in order to drive away the bats that reside in the building," he said.